When White House press secretary Sarah Huckabee Sanders admonished us that “If you want to get into a debate with a four-star Marine general, I think that that’s something highly inappropriate” I immediately thought of Willie and Joe.

Willie and Joe were two fictional American soldiers in the European Theater of World War II, the creation of my friend and fellow New Mexican, the late Bill Mauldin.

Bill was in the army and a cartoonist who worked for the old Stars and Stripes newspaper which was distributed to the troops. He drew Willie and Joe as two scruffy looking “grunts” who were always pointing out the differences between the way the “grunts” and the officers were treated. 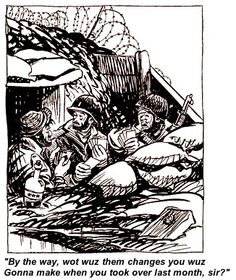 Donald J Trump’s Chief of Staff, John Kelly, a retired four star general, has been under heavy fire for the contemptuous way he “dissed” the congresswoman who described his boss as having been “disrespectful” in a telephone call to the bereaved widow of Sgt. La David Johnson, killed in Niger.

So, when Ms. Sanders sought to turn aside the criticism by sniffing that it  would be highly inappropriate to argue with a Four Star General I wondered what Willie and Joe might say.

“Hey Willie, did you hear about the woman who said it would be ina, uh, ina, oh, heck, wrong to talk back to a four star general?”

“Joe, if we can’t do that who does get to do that, just the Germans?”

The G. I. s (common enlisted soldiers in the American forces of World War II) and their folks at home loved it but not all the officers did, particularly a general named George Patton.

Patton called Mauldin in and chewed him out good for disrespect to his superiors! But that’s one fight Patton lost.  Willie and Joe kept right on grousing about the officers and there was nothing more old “blood and guts” chose to do to try to stop them.

In late 1991, my producer and I on the ABC magazine program Prime Time Live took Mauldin to Saudi Arabia for the U S  buildup to expel Iraqi forces from Kuwait.

Bill drew Willie and Joe in the desert.

When our troops there discovered who this guy with a sketch pad was they mobbed him for autographs. Our young men and women may not have known a lot about Bill Mauldin but they knew that to their dads who had fought in World War II he was a hero!

The point of this story ought not to be lost on Sarah Huckabee Sanders. To tell Americans it would be “inappropriate” to call out someone because he is a Four Star General is not to understand what this country has always been about, is not to understand why although they debated the proposition our forefathers decided not to have a King here, only another common man who would be called “president” and who served only at the pleasure of the other common people who elected him. And, of course Generals serve at the pleasure of their civilian bosses.

General Kelly has served honorably and well but was way off base in his attack on Congresswoman Frederica Wilson. First, he had his facts wrong and Second, his defense of the indefensible actions of his boss reflect the kind of servile obeisance which is “inappropriate”and certainly unbecoming of a Four Star General.

Willie, Joe, what do you have to say about General Kelly?

“Ah, Joe, he’s not really a bad guy just kinda lost it for a moment…could’a happened to anyone.”

“Right, Willie, but maybe he needs a rest from the office. Come on down in the mud with us for a few days. Do him a lot of good.”

That’s right, the last time I saw Willie and Joe talking about all this they were laughing.

PS – On November 23, 1963, with the nation in shock and grief at the assassination of John F Kennedy, Bill Mauldin drew Abraham Lincoln sitting in his Marble Chair in the Lincoln Memorial in Washington holding his head in his hands. In my estimation, that “cartoon” has never been topped.

2 Replies to “Wille & Joe are Laughing”